After Tuxedo left us, Oreo was very lonely. So I decided to try to find her a companion – a senior male, if possible. So we haunted Sammie’s Friends for a few visits, and kept one male with us for a month before I gave up on him – he had real problems that Oreo couldn’t deal with. 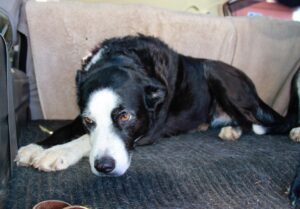 Then I got a call about Mr. Mackey – an adult male who had some physical issues. It turned out he had congestive heart failure, possibly from a spinal infection that he got from a bug bite or some sort of cut. He was a very sweet, silly dog and Oreo loved him. He was with us for 8 months – from the beginning of 2021 thru Nov 13, 2021. This was quite a bit longer than anyone expected him to last. When it was his time to go, he seemed to know it. He was breathing over 100 times a minute, and couldn’t really eat or drink. Brunswick Vets – who weren’t even our vets at the time – graciously took us in on that Saturday morning and helped him cross the Rainbow Bridge. He went very quickly and peacefully. 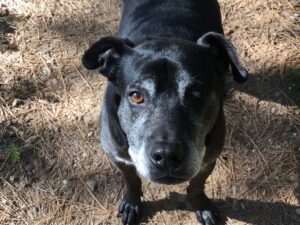 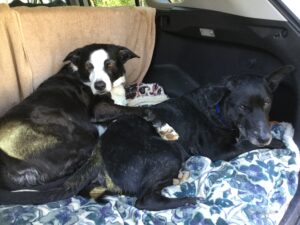 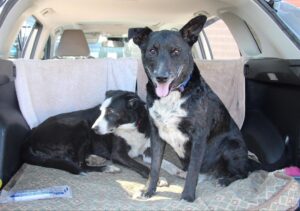 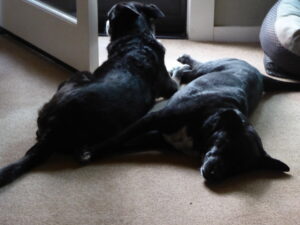 A few days later, I happened to find a new home that was (almost) exactly what I’d been trying to find for years. My old place on Lake Vera would have been difficult to evacuate, and I always felt I had to take my dogs with me wherever I went during fire season because of the problem of getting back home to get them out. My back has been having pretty serious issues since mid-2020, so the size of the yard at the old place was overwhelming me. (Basically 1.5 acres of pine needles that needed nearly constant raking to keep as fire-safe as possible). When I found the new place, I was eager to grab it since I now had only one dog! But after nearly 2 decades on Lake Vera, moving was very difficult – and the stress was compounded because I didn’t put it on the market until I’d bought and moved into the new home. (The anxiety of buying before selling was huge – but the old place sold in 1 day).

My new place is in town (Morgan Ranch, Grass Valley) so not as much of an evacuation issue; it also has a much smaller yard so it will not be nearly as much work. (But the “almost” in the prior paragraph refers to the condition of the yards, irrigation, and the mess left by the horrible prior gardener!)

So, after several weeks of getting used to the new place, I was introduced to another great foster dog: “Bo”. Oreo took to him immediately, and we both absolutely loved him: he was very loving, perfectly behaved, and the way he played around Oreo tickled me greatly. Oreo has had fairly severe arthritis since she was 6, so he’d just run around the house, back and forth, encircling her and running away again, while all she did was stand there and bark-bark-bark at him. I wanted to adopt him, but unfortunately, the owner resolved some problems and I had to give him back after 5 weeks. 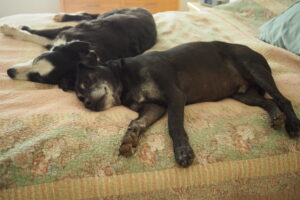 At first, I was broken-hearted – losing 3 dogs in less than 2 years. And I sensed that Oreo was not particularly eager to welcome yet another foster. We tried one senior female at Sammie’s, but Oreo wouldn’t even look at her; then she growled when we tried to put the other dog into the car with her. So I decided to wait a bit to find another companion. But I’m starting to think that maybe Oreo is ready for another pal – and maybe I am too . . .

So I will keep looking for yet another perfect dog – but I’ve had so many perfect doggies thus far, I fear I’ve used up all my luck.